The Chocolate: How do I love thee?

The Chocolate: how many ways do I love thee? Let me count them…

Everyone once in a while, a place comes along that just blows away my expectations. The Chocolate is one such place.

END_OF_DOCUMENT_TOKEN_TO_BE_REPLACED 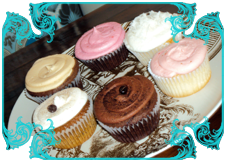 We hit St. George for the President’s Day weekend. It was warm-er than Salt Lake, and on Saturday, after stopping by a local book shop (The Little Professor Bookstore on Main Street, which I recommend you visit), we decided to pick up some cupcakes.

My wife had been to 25 Main before, a little cupcake shop that she visits every time we are in town. The booths are covered with a light blue and brown pattern that is not unlike the fabric she likes to buy. And, not surprisingly, there are cupcakes there that she likes, as well. Especially the coconut flavored and sprinkled cupcakes.

“The best coconut cupcake I’ve had from anywhere,” she says. We had heard that the banana were good, as well, but since they are only made Wednesday through Friday, we settled for the coconut, as well as a vanilla and a vanilla strawberry.

They weren’t too shabby, either, as cupcakes go. Here’s the thing, though: they weren’t better than homemade cupcakes that I’ve had any number of times. The frosting was light and fluffy, the cupcakes were moist, but beyond that–average. They were small, the parchment no better than what could be bought in a grocery store, and the frosting not thick or remarkable.

Not sure if it’s worth it. Good, but not great. Oh, and they have pizzas, paninis, pasta, and salads. I’ll try those next time, because we’ll be back; my wife loves the cupcakes.