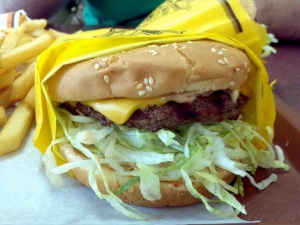 On the one hand, there are a lot of burger joints out there, and it takes a bit to rise above the pack. On the other hand, how hard is it to mess up ground beef?

Well, I’ll let you answer that latter one for yourself, because I think it’s clear that there are still places that mess up ground beef.

Crown Burger, though, manages to not mess it up, at least not too badly. The fact that I had to wait in line to order must say something, at least about popular demand. 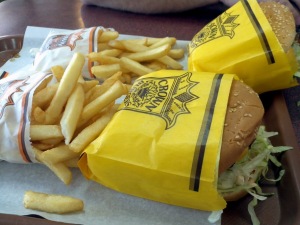 That said, I have little to say. The toppings were fresher than most and lettuce shredded beats lettuce whole, and the bun sure beats  the dry thing Wendy’s they put meat between. By a mile. It’s good enough  for a lunch, but probably overpriced (two combos cost me almost $18). The fries are hefty, somewhere between steak fries and burger fries, and are, like the burger, sufficient.

The last point in Crown’s favor is that it is, if nothing else, consistent. Every burger you order is the same.

Service: 5/10 (because I had to wait on myself)
Atmosphere: 5/10 (atmosphere? Conversations near crowd levels)
Food: 13/20 (gets a double weighting because it matters more)
Parking: 7/10 (surprisingly full parking lot, ya know, but still parking was fine)
Eat-ability Quotient (an average of scores):  6/10

The Bombay House: All sorts of win.

There are a good sampling of  Indian cuisine restaurants in Salt Lake City, and I’ve sampled several of them. Ali Baba provides good portions and a quick, lunch-time stop. Himalayan Kitchen has a great site downtown and serves excellent food. But the one place I return to again and again, and will continue to haunt for years to come, is The Bombay House.

Located on the backside of an office building, just across from where the K-mart once was (and where Wal-mart would like to be), The Bombay House is an unlikely place for a great restaurant. However, it never seems to need to rely on drive-by traffic to fill its tables. They don’t take reservations, either. And yet, in all the occasions we’ve decided to drop in–weekend, mid-week, early or late–there seems to be at least one other party waiting for a table in front of us. That said, we’ve never had to wait very long either. The service is quick, attentive, and organized.

But enough about how popular The Bombay House is. Let’s talk about the food. If I had my druthers, I’d order the lamb masala every time. The lamb is tender, juicy, and soaks up the masala sauce well. The dish–barbecued on a kebab and then cooked with onions, garlic, ginger, tomatoes, and cream–is a fantastic meal to start with, if this is your first time at The Bombay House. Eaten over rice or with garlic naan, it’s fantastic.

Since my Better Half prefers chicken, last week we decided to order the chicken tika masala. While chicken is by nature a little more tough, the dish was just as good, and I enjoyed dipping ripped off chunks of naan in it.

We also tried one of their new dishes, the chicken makhani. This dish–boneless tandoori (which means it was cooked on a skewer over a coals) chicken cooked with onions, garlic, ginger, tomatoes, cashew nuts, cream and spices–has a strong licorice like flavor that I believe was coriander. While I liked the spice and the flavor it lent to the dish, there were a lot of large onions, more than I generally like. That said, I’m not one to shake a stick at a good dish, and I finished off the bowl without too much effort.

To complement the meal, we usually order a couple of pieces of garlic naan, flat bread flavored with cilantro and garlic, and absolutely a necessity for any dish at The Bombay House.

If you haven’t visited The Bombay House yet, they have two locations, and both are worth the meal: on University Avenue in Provo and on Parleys Way in Salt Lake. Find time, and head on over. Even if you have to wait for a few minutes, it’ll be worth it.

Bruges Waffles and Frites: My wife’s favorite way to start a Saturday

With good reason, when I want to curry favor with my better half, I suggest we go to Bruges for breakfast. Her eyes light up, and before I know it, she’s packed our two-year old in the car seat, buckled her self in, and honking the horn to get me out of the house.

We first found Bruges several years ago while frequenting the Farmers Market at Historic Pioneer Park in the summer time. They hosted a booth there, and we would pick up a hot, chocolate dipped Liège waffle while we shopped. A couple of years later, Bruge found a permanent location in a building across the street from the Market, right next door to Caputo’s. (But don’t take your waffle into the deli at Caputo’s…there are signs all over the doors warning waffle eaters away.) 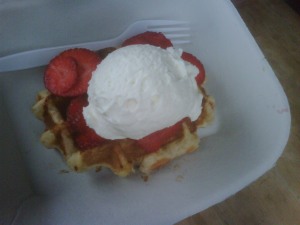 Not as small as it looks here...

The shop is tiny, quainter than quaint. A bar sits against one wall with stools for about five, and the counter where you order is just three feet away. Outside, tables sit in the open air for customers to enjoy the waffles, which are served through a window when ready. They come out hot, in vanilla or cinnamon, with cream or strawberries, or both. If you’re looking for a real treat, get it dipped in chocolate, too.

A lot of people ask me what kind of waffles these are: are they real Belgian waffles? Yes, and no. They’re Liège waffles. Here’s what the website says:

Like the Brussels waffle, the Liège waffle is eaten hot. Its particularity is that it must contain pieces of sugar within a leavened dough.

According to legend, it was invented in the 18th Century by the Prince of Liège‘s cook. At the Prince’s request, he experimented with cooking a kind of bun by adding polished sugar to the dough. Seduced by the appetising odour of vanilla that emanated during the cooking, the Prince fell for the new cake’s charm.

He was not the only one, and the waffle rapidly became very popular in the Liège region and throughout Belgium. Today it is known as the Liège waffle and continues to seduce generations of food-lovers ! 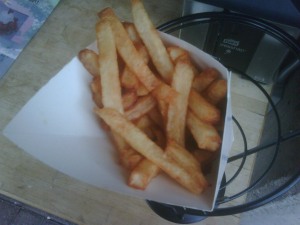 Once your sweet tooth is appeased, it’s time to get something salty. And if my wife weren’t such a fan of the waffles, I’d go straight to the frites (I think that’s just a fancy way of saying French fries) every time. Bruges makes them crispy and dry. While I have no doubt that there is little about them that’ll improve my health, they aren’t oily or greasy, at least not abnormally so. What they are is fantastic, crispy, and delicious. After a super sweet waffle (did you notice that the waffle has pieces of sugar within the dough?), the salty taste of an order of frites is just right, and a step up from your fast-food fries.

It’s not hard to recommend Bruges for breakfast, but they’re open all day, and the waffles make a great desert, too. If you see me checking in on a Saturday morning, be sure to say ‘hi.’

END_OF_DOCUMENT_TOKEN_TO_BE_REPLACED

Do I go too easy on the restaurants I review? You tell me. I think I just happen to end up at some good restaurants.

Today, I’m talking about The Atlantic Cafe on Main Street in downtown Salt Lake City. It’s a tiny little place with a welcoming atmosphere and a busy lunch clientele, and a place to which I will gladly return to eat again.

We arrived just after the noon time hour began, and our party was given a long table down the middle of the room. The waitress, with an accent that sounded like she hailed from somewhere in the eastern Mediterranean, was friendly and personable, not to mention patient, as we waited for our group to all arrive, then wait again while we looked at the menu, then wait again when we weren’t sure even then what to order.

Yeah. We were that indecisive.

I ordered a “Diabolo” sandwich/panini, and it was a fresh and different change from my typical sandwich, and just tad spicy. The meat was well cured and the toppings were fresh. Across the table, Clint got a kabab that he very much enjoyed, and Spencer ate a gyro in about as much time as it takes to type this sentence. Other orders included a vegetarian lasagna that got excellent reviews, as well. Our drinks were kept full, and the food was brought quickly.

The lunch prices were reasonable–I think I dropped less than $10 on the meal and soft drink.

The Atlantic was worth the time to stop by, and I think the crowd that filled each table agreed with me. It was packed by the time we left just after 1.

APROPOS: As we were finishing up, I noticed a picture of Mehmet Okur on the wall, and then looked up to see him walking in with a friend. Apparently, he’s a fan, too. END_OF_DOCUMENT_TOKEN_TO_BE_REPLACED

The dodo was a large flightless bird related to the pigeon that went extinct several hundred years ago. With any amount of luck, the Sugar House restaurant by the same name will not experience the same result. Quite the contrary, actually.

I expect this one will fly.

I had no idea what to expect when I walked into The Dodo. I hadn’t read any reviews and, because it was a spur of the moment choice, I hadn’t asked around about it, either. My wife–very pregnant and feeling more than a bit of “cabin fever”–was due for a night out, sans toddler, and we decided to go a step up from our usual haunts (Cafe Rio, ya know?).

The Dodo was our pick. It was not a mistake.

Seated quickly in what was obviously a busy hour (about 7 PM on a Saturday night), we were quickly brought drinks. Our waiter was knowledgeable about the menu and the specials for the night, and he did a great job at keeping our glasses full. The service was great all night, and near the end of the meal, the manager came around to check that everything was to our satisfaction.

At the waiter’s recommendation, we ordered some blackened shrimp tacos while we waited for the main course.  They must have been a special, because they weren’t on the menu. However, they were delicious. In retrospect, I wonder if I might have been satisfied, and filled, by a second order of the tacos.

For dinner, I ordered the Shrimp Margarita Pasta. I guess I just hadn’t had enough shrimp, yet. It was fresh and just a bit spicy, and it had just the right mix of flavors. Other than the avocado, I enjoyed the angel hair pasta tossed with tomato, shrimp, and onion and garnished with cilantro.

When asked if we wanted dessert, we were too full to fit it. Since eating there, at least three friends have mentioned how good the desserts are, noting that the chef has been working on perfecting them for some twenty-five years, so I regret my decision. Next time, I’ll get dessert to go.

If you’re in the neighborhood, I recommend the Dodo. It’s a delicious and delightful stop just up from the usual haunts and well worth the extra cost, too.