The great thing about finding good Mexican food off the beaten path is that you don’t have to wait in line. Walk right up, place your order, and find a seat. Five minutes later, you’re enjoying your enchiladas, heaps of beans and rice, washed down by your favorite soft drink.

You can worry about the calories later.

In the meantime, get off the beaten path and head over to Chunga’s and enjoy that good Mexican food.

Over in Rose Park on 900 West, Chunga’s doesn’t look like much. More than meets the eye, though, and it’s worth checking out. The menu is simple, but looks written for a mixed clientage of native Spanish speakers and local gringos. I ordered my standard enchiladas with rice and beans.

While we waited, we were treated to restaurant style chips and salsa, the kind that you can’t stop eating. At most Mexican restaurants, the chips are long gone, along with my appetite, before the food arrives. Today, though, my order arrived before I could down more than  three or for chips.

And how were the enchiladas? Let me put it this way: not only did I finish them, but I also finished the rice and black beans that came with, as well as the pre-meal chips. It wasn’t quite Red Iguana, but Chunga’s certainly proved itself worthy of a drive away from the usual haunts in Downtown.

Last point: if it’s warm enough, don’t miss the chance to sit outside. There’s a lot more room outside in the patio area on the north of the building than there is inside. Might as well take advantage of it.

Check out my other restaurant reviews here. If you have a restaurant you’d like me to try out, please contact me by sending an email to SLCWeekendReviews@gmail.com.

If it were to be judged solely on the service, then Bohemian Brewery & Grill would earn a “Two Thumbs Up” and a Gold Star, too. Add food to the equation, and I doubt the score would change.

Within seconds of walking into the Bohemian for the first time, I was greeted with a smile, taken to a seat, and informed, quite pleasantly, that nothing I ate today had been bottled, canned or packaged. It was all fresh.

“The only way you get better German food,” he said, “is if you buy a plane ticket.” Presumably, that ticket would need to land in Berlin.

After eating, I had to agree. The food was great.

I ordered a brat sandwich with a side of potato pancakes (no, don’t ask me how potato pancakes qualify as a “side dish.” I shared them, effectively halving my calorie intake for the meal to about the average for three normal people…and I am normal people). The sandwich was a sliced brat drowning in swiss cheese and sweet tasting sauerkraut on parmesan bread.

It was a delicious combination and a cornucopia of flavor. I’ve eaten a few brats in my day. This one had more than a hint of fennel and when the contrast of the slightly salty parmesan bread was added to the equation, made for a delicious, if messy, meal.

Accompanying the sandwich were garlic fries. When I say “garlic,” I mean that the fries were literally flavored with fresh garlic. It was delicious, only adding to the palate of diverse flavors coming out of this meal. The only complaint I have was that as good as the fries were on the outset, and as hot as they were, as time passed they became soggy. Not too unexpected, but still, there it is. 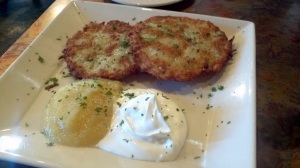 The potato pancakes were passably good. Crisp and fried on the outside and just thick enough to leave a soft mushy texture on the inside.

I’ll let you do the math on the calorie content of the meal. Regardless, it was enjoyable, and worthy of at least skipping a couple meals to compensate.

Check out my other restaurant reviews here. If you have a restaurant you’d like me to try out, please contact me by sending an email to SLCWeekendReviews@gmail.com. 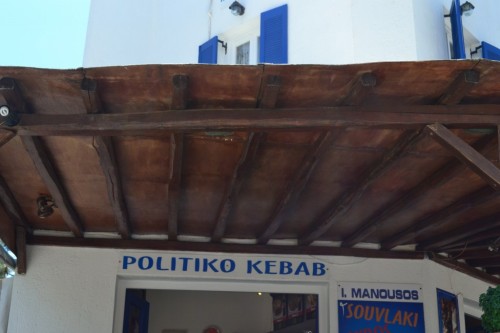 To be sure, it is not a shabby selection. Even the cheesesteak is suitable.

And here it is:

And it almost is. The meat is chopped steak, the cheese is drizzled on, and the toppings are appropriate. My complaint? The bread seemed to overwhelm the meat.

Sadness. Ergo, I will continue to look for a better cheesesteak.

Ali Baba: it’s your fault if you leave hungry

Ali Baba shares a parking lot with a gas station across the street from a Salt Lake County Parks and Rec golf course. If you didn’t know it was there, I wonder if you’d notice it. I know I wouldn’t have. I’ve driven by dozens of times, even fueled up at the gas station, and I’ve never noticed it.

“There used to be a 5 Buck Pizza here,” the woman behind the counter told us when I asked.  “But we’ve been here for more than a year.”

To read the reviews on Urban Spoon, it has been a successful “more than year.” It has developed a following of devotees who love Ali Baba’s food:

“I’ve tried almost all of the Pakistani/Indian food in the valley and this is probably the BEST!”

“I have been visiting this place almost daily. The food is Delicious and filling.”

“All in all, i can see myself coming back here repeatedly.”

Yeah. Lots of fans. So I decided to take a trip over to check it out. My conclusion? It’s not too bad.

To be sure, it is not the best Indian/Pakistani food in town; that award, in my book, still goes to the Bombay House or the Himalayan Kitchen (I have also heard that Royal India is fantastic, too, but I’ve not made it there, yet). But in it’s class–along with places like “Curry in a Hurry“–Ali Baba does rank well.

Unlike some of the more expensive Indian restaurants, Ali Baba has a spartan dining room, very utilitarian and simple. You wouldn’t know that the cuisine was Indian/Pakistani but for the menus. They could have served burgers or burritos for all the room indicated. However, it was clean and tidy, and so I have no complaints.

We arrived a little before the lunch crowd, and the smiling waitress/server took our order and brought it out after just a few minutes. Later, the cook, or owner? came out to ask us how we were enjoying the meal.  It was a nice detail, and I appreciated the thought. 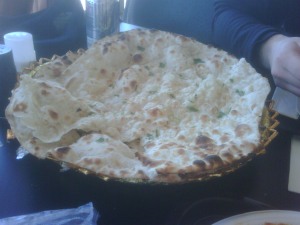 As for the meal itself, I was pleasantly impressed with both the quantity and the quality. While nothing to write home about, The naan was light and savory, as well as in a portion larger than we could finish. We both ordered a curry chicken combo which, while light on the amount of chicken, compensated with plenty of lentils and a side dish of some type of potatoes and cabbage.

I like a spicier curry, and this curry was not very spicy. However, I suspect it was because it was toned down for my western palate. Even so, it was a tasty combination with the garlic naan.

Will I go back? Probably not unless I am in the neighborhood or have been playing golf across the street. It was good, but just not quite good enough to go out of the way to have over lunch.